Almost two thousand years ago, a shocking warning was documented in mysterious ancient manuscripts and predicts an apocalyptic global invasion of earth climaxing with Armageddon and the end of the world. This little-known chronicle of the future was mysteriously delivered to an unsuspecting earthling by a powerful supernatural being from another dimension in time and space. A “Doomsday Clock” currently frozen in time will be activated by an imminent, unexpected international incident and begin the countdown to the end of the human race. We may be the generation targeted for destruction-the “terminal generation.” Once the clock starts ticking, it can’t be stopped and only those possessing the secret to surviving the end of the world will escape.

Does this sound like the latest Hollywood blockbuster sci-fi movie? Actually, this non-fiction thriller takes the reader on a breathtaking, unforgettable journey to the future to discover the little known and only true account of Armageddon and the coming destruction of the world.

Planet earth is now accelerating on an unavoidable collision course with destiny at the intersection of ancient prophecy and 21st century world events. Read Escaping Armageddon and learn the secret to surviving the end of the world.

Order your copy of Escaping Armageddon. 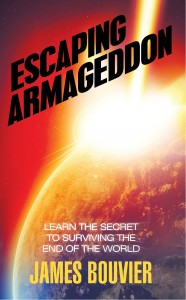