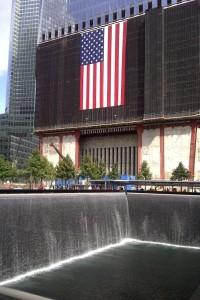 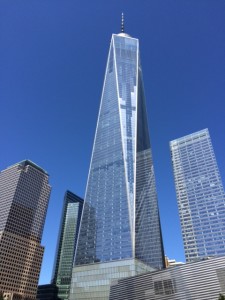 On this plot of ground fourteen years ago, September 11, 2015 the two World Trade Center buildings that towered over New York City for 28 years were suddenly and completely destroyed by nineteen terrorists taking the lives of almost 3,000 people in less than two hours. If it had not been for a 40 minute delay in United Airlines Flight 93 taking off, flight 93 may have successfully crashed into the capital in Washington D.C., believed to be the fourth target. In addition there were only about 15,00 people in the WTC complex that morning for various reasons rather than the usual 50-60,000. So the attack could have been much more deadly. 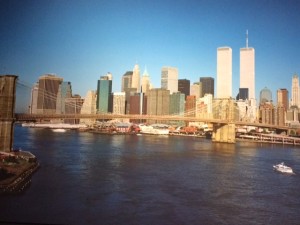 We frantically stopped what we were doing, flooded the churches looking for answers, prayed for a while and then after a few months returned to business as usual. Most of our younger generation do not know about 911 while the memories of that day have faded for many others. Of course we built a stronger, taller Freedom Tower in the place of the fallen towers. That’s what we do! Since I worked in the South Tower during my engineering career and had a close encounter with the terrorist attack on the WTC those two iconic buildings will always have a special place in my heart.

Notice the image of the cross on the Freedom Tower caused by the reflection of the sun on the glass the day I took the picture. Is this a message for us? Interesting! We visited the NYC WTC Memorial this week and found it to be absolutely awesome. I was even able to look up the bio information on one of the guys I worked with who died in the terrorist attack.

Accounts in the Bible supported by history  confirm that there is a stark similarity between the spiritual DNA of ancient Israel and America. Israel was warned by God’s prophets many times over the years to return their nation to Him but Israel repeatedly refused to listen and blatantly followed after other gods. The people as well as the religious leaders and the political regime mocked His messengers and ignored His word. As a result they suffered His judgment eventually seeing Jerusalem destroyed and the Israelite people scattered across the world for almost 2,000 years until 1948 when Israel became a nation again.

I believe God was trying to tell us something on that cloudless blue sky day in 2001 when nineteen terrorists were able to mysteriously breach our security and seemingly supernaturally hijack four modern commercial airliners out of three separate airports without a hitch and skillfully fly them into three of their targets with the precision of a Swiss watch. Sounds impossible doesn’t it? And were we not lucky that there were only about 15,00 people in the complex at that time? Or was that number kept small by the grace of God?

We must stop the accelerating downward spiritual spiral of America and return our nation to the Godly fundamentals on which it was founded before it is too late. The day we refer to as 911 may have just been another warning. God must shed tears as He watches: the family unit deteriorate; our government embrace a fundamental change in the definition of marriage that has been intact since the beginning of mankind; laws that tolerate any and all religions except Christianity and a Washington administration that continues to support abortion (we have now aborted more than 50,000 babies since Roe vs Wade). The world is on fire around us and we don’t even notice the smoke of destruction is at our doorsteps. It is only God’s compassion for us and His amazing grace  that His patience with us continues. However as with Israel, God’s patience may soon run out!

Read ESCAPING ARMAGEDDON. I believe we are at the tipping point! 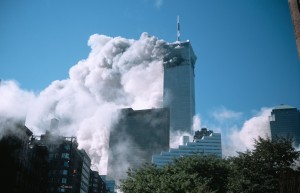