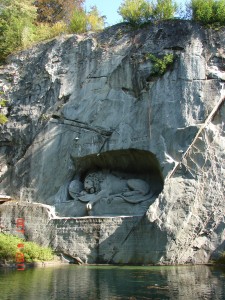 The picture to the left is a magnificient monument carved in a rock cliff in Lucerne, Switzerland dedicated to the Swiss mercenaries who were killed during the French Revolution. The monument is called the “Dying Lion”.

Is our nation still a giant or are we on the slippery slope to death as a great nation? Our nation is under attack from within and our world is in chaos.

Read what ancient manuscripts have to say about the future of our world in ESCAPING ARMAGEDDON!