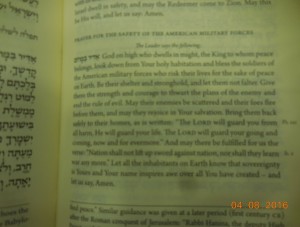 My wife Sharon, and I just returned home from 10 days in Israel on a service trip with our church just prior to the bombing of a bus in Jerusalem. Shortly afterward Vice President Biden was in Israel and  insulted the Prime Minister for the way he is leading Israel and protecting their land. During our service trip we attended a synagogue where believing Jewish people were worshiping. During the service I noticed this prayer in the Jewish prayer book. The Jewish people in this prayer are praying for the safety and well being of the United States military. Can you believe that? We cannot see our way to back our only democratic ally in the Middle East and yet they are praying for our military.

I know the picture of the prayer is fuzzy so I reprinted it below. Where in the world are we going????

Read NIGHTMARE IN TIMES SQUARE, published later this year, to see where we are going!

PRAYER FOR THE SAFETY OF THE AMERICAN MILITARY FORCES

GOD ON HIGH WHO DWELLS IN MIGHT, THE KING TO WHOM PEACE BELONGS, LOOK DOWN FROM YOUR HOLY HABITATION AND BLESS THE SOLDIERS OF THE AMERICAN MILITARY FORCES WHO RISK THEIR LIVES FOR THE SAKE OF PEACE ON EARTH. BE THEIR SHELTER AND STRONGHOLD AND LET THEM NOT FALTER. GIVE THEM THE STRENGTH AND COURAGE TO THWART THE PLANS OF THE ENEMY AND THE RULE OF EVIL. MAY THEIR ENEMIES BE SCATTERED AND THEIR FOES FLEE BEFORE THEM, AND MAY THEY REJOICE IN YOUR SALVATION. BRING THEM BACK SAFELY TO THEIR HOMES AS IS WRITTEN, “THE LORD WILL GUARD YOU FROM ALL HARM, HE WILL GUARD YOUR LIFE. THE LORD WILL GUARD YOUR GOING AND COMING, NOW AND FOR EVERMORE.” AND MAY THERE BE FULFILLED FOR US THE VERSE, “NATION SHALL NOT LIFT UP SWORD AGAINST NATION, NOR SHALL THEY LEARN WAR ANYMORE.” LET ALL THE INHABITANTS ON EARTH KNOW THAT SOVEREIGNTY IS YOURS AND YOUR NAME INSPIRES OVER ALL YOU HAVE CREATED, AND LET US SAY AMEN.