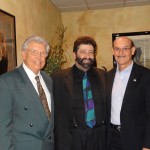 IT’S COMING, THE DAY THAT WILL CHANGE AMERICA. That’s right; the results of the election for President of the United States on November 6 will change America regardless of the outcome.

If the election goes one way, America will return to be the most respected and prosperous capitalistic nation in the world with religious freedom for everyone while following the leadership of the principles of God on which it was founded. America will again provide the pursuit of happiness for everyone, a promise guaranteed by our Constitution with unlimited opportunity for those who succeed rather than redistribution of wealth to those who don’t.

If the election goes the other way America will continue down the slippery slope to becoming a third rate nation strangled by debt, snubbed by our enemies, eventually overtaken by those to whom we owe massive amounts of money and those whose principles we tolerate and embrace even though they threaten our freedom that so many of our military men and women have died for, including my father.

Can you guess which man running for President of the United States will result in which outcome?

Vote November 6 if you haven’t already voted and don’t vote for your party, VOTE FOR THE FUTURE OF THE UNITED STATES, for your nation, your children and your grandchildren. You may never have another opportunity.

VOTE FOR ROMNEY, PRESIDENT OF THE UNITED STATES.