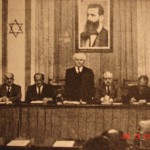 The sound of prophecies being fulfilled that were written thousands of years ago predicting what the world will be like for those living during the last years of the earth’s existence as we know it has been silent for centuries. The skeptics as well as many Christians began to ask where are some of the signs of the last days. After all, it has been almost 2,000 years since the Biblical prophecies were given to us. However, on May 14, 1948, with the sound of a gavel hitting the table, David Ben Gurion, the first Prime Minister of Israel declared Israel a nation again for the first time in almost 2,000 years. That day in what is today Independence Hall in Tel Aviv, Israel was a turning point for mankind. On that day the world began to accelerate on an irreversible collision course with destiny beginning with at least ten Old Testament Biblical prophecies fulfilled that were specifically related to the rebirth of Israel. Since that day almost every event, technology and evolution of global government necessary to usher in the final days of life on earth has taken place.Perhaps for the first time now you can read and understand the signs and events leading up to and including the last seven years of the world’s existence climaxing with Armageddon in this new non-fiction book, ESCAPING ARMAGEDDON.